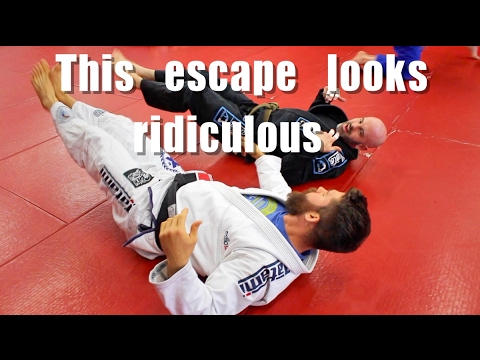 This has to be the most ugly BJJ mount escape I have in my Jiujitsu arsenal. Strangely enough though, it works so damn well!

I’ve had the unfortunate need for mount escapes in BJJ competition and this one has been one of my go to escapes in Brazilian Jiu-jitsu.

I use this escape to setup positions like Butterfly Guard as well as Single X Guard. This is significant because I go from being in a very bad position to being in a fantastic offensive position in Brazilian Jiu-jitsu. Ready to sweep.

It changes the momentum almost instantly.

Now again, I know it’s the ugliest BJJ mount escape you’ve probably ever seen. And you might be skeptical. So I’ve included a couple of matches I was able to find where I used it. One match was from a BJJ tournament in 2012 and the other was from the IBJJF Atlanta Pro in 2016.

Also, it might appear like I am doing a big bench press or using a lot of muscle. And I am using a little muscle. But most of the muscle is hips and core. I’m primarily pushing off my elbow and using the flipper motion with my legs to make space for the legs to escape the mount.

Everyone has seemed to enjoy the snippets where I’m coaching with my students. So I’ve also included some segments to look at.

I hope this ugly BJJ Mount escape and sweeps are useful for you in your BJJ training and bjj competitions.

Thanks for watching!
-Chewy