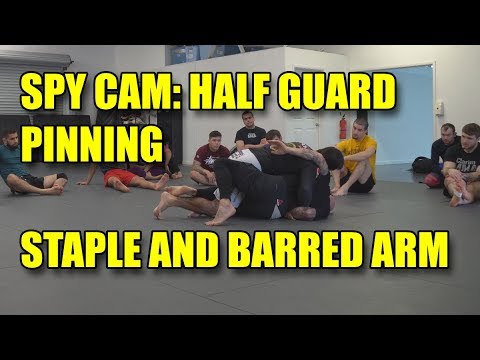 Half Guard Pinning, the Staple Pin and the Barred Arm Pin – David Avellan

I came to train in a Cage Wrestling Class at Drysdale Jiu Jitsu on 2/19/18, but instead got surprised to teach by coach Anselmo Gutierrez! So my plan to spy on his class failed, and instead I spied on myself.

Fortunately, I had something in mind to teach already that I had worked with Anselmo in a private lesson – pinning from half guard.

Pinning is often overlooked in BJJ because without striking, pinning doesn’t really do much. But in MMA, pinning is one of the best ways to score strikes and potentially finish a fight. For me, half guard is the best place to pin someone, as you have control of both their hips and arms – making it very difficult for your opponent to escape.

In this video, I go over to pins – the Staple Pin and the Barred Arm Pin. Both are very easy to to do and come up in pretty much every MMA fight.