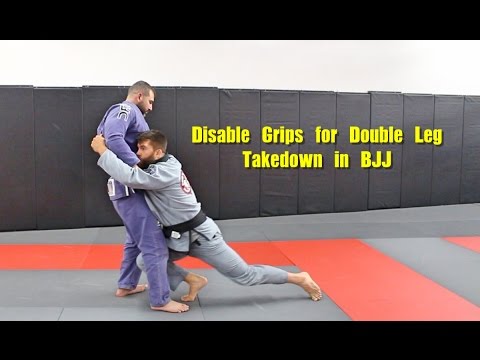 Last week I showed a single leg takedown for BJJ vs strong established grips in the basic straight forward collar and sleeve position that many people end up in.

In this video I demonstrate a simple off balancing technique to weaken the grips momentarily to hit the double leg takedown in BJJ.

The double leg from wrestling is a great takedown if you time it correctly. Even if you’re up against a strong opponent in Brazilian Jiu-jitsu. If you can time the movement right and react correctly against you’re opponent.

The video starts off with grip fighting using an off balancing technique I learned from Judo. It involves getting the person to fall back on their heels. This is essential to setting up the double leg takedown.

It has a name in Judo but oftentimes I just use the term undressing the shoulder for my students so it makes more sense or is easier for them to remember during a match.

By snapping back the gi we can disable the grips to make our move in for the double leg. In addition, it puts the person flat on their heels which ensures they will not be able to defend themselves effective against the attack.

This is such an easy setup for the double leg takedown in BJJ. It also pairs together nicely with the single leg series I showed last week.

So if you’re looking for a simple way to setup and execute a double leg takedown in the gi during Brazilian Jiujitsu training or competition. Give this a try. Again, be sure to drill the off balancing technique first. Then after you get used to their movement. Add the double leg in. It’s very effective and a simple setup you can use. Even if you aren’t the best wrestling.