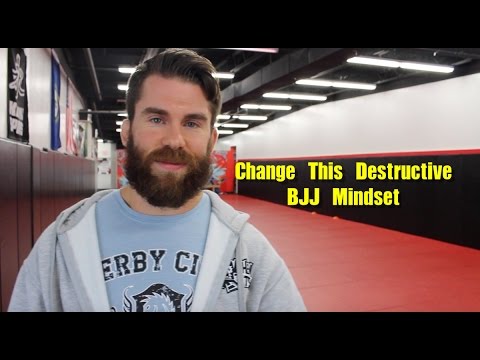 This type of situation and BJJ mindset came up recently for one of the viewers on the YouTube channel.

The viewer says that when he rolls with people of the same skill level in Brazilian Jiujitsu. He turns it into a Me vs You mentality. He says this BJJ mindset is negatively impacting the relationship with his Brazilian Jiu-jitsu training partners. He also says that he seems to get injured more during rolling as well.

This is such a common problem in Brazilian Jiu-jitsu. I’ve seen so many of my students get caught into this trap where they let their ego get the best of them. Likewise, I experienced this unneeded frustration for years at the beginning of my training.

It wasn’t until I was nearly a purple belt in BJJ that I was able to let go of this “I have to win”, “It’s me vs you” mentality.

When I lost this mentality it literally changed my BJJ training completely.

I went from being frustrated after I was caught in a submission or technique to being able to learn from the mistakes.

I also learned that it’s not about beating my training partners on the mat but rather we are beating one another to make ourselves better.

I hope this BJJ mindset video is helpful to you if you’re struggling with this type of mentality during your BJJ training.