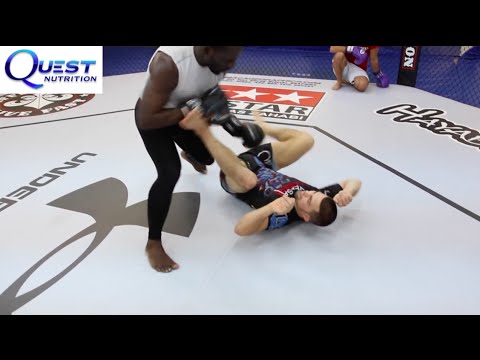 As its name suggests, Mixed Martial Arts is an amalgam of various fighting styles. This is probably what makes it one of the most exciting combat sports today. Plus, it can be quite spectacular and exciting to watch, which ensures its massive media coverage and makes it one of the top combat sports to bet on today. We’ve seen many athletes try their luck in the Octagon, experts in various fighting styles – at the end of the day, though, there are three styles that, once combined, can ensure a chance for success in these fights. Let’s see them from the bottom up.

The basis of Brazilian jiu-jitsu is the use of technique and leverage, which makes it the ideal style to subdue opponents, even those who are bigger, stronger, and heavier. The trick is to bring the fight to the ground level and apply chokeholds and joint locks to force the opponent into submission.

Brazilian jiu-jitsu is the ideal style to subdue an opponent but bringing them to the ground is a different matter altogether. Several styles excel in this area – judo and wrestling are perhaps the two that stand out.

Judo is one of the “ancestors” of Brazilian jiu-jitsu – it was developed based on the Kodokan judo ground fighting. Judo is the martial art ideal for taking the fight to the ground level as its goal is to use throws and takedowns to overpower the opponent. From there on, it’s BJJ’s turn to force a submission. Wrestling is a sport similar to judo but without the philosophy (obviously) and with a focus on grappling.

Bellator MMA fighter and Pride FC champion Fedor Emelianenko is a specialist in Judo and Sambo (the Russian offshoot of the sport), and Ronda Rousey, the woman who changed MMA forever (for the better) is also an Olympic medalist in Judo.

The highest level of fighting in mixed martial arts (from the ground) is striking and kicking. After all, what is the use of your proficiency in Brazilian jiu-jitsu and Judo if you’re kept at a distance by a flurry of punches and kicks by your opponents, never getting the chance to grab, throw, and subdue them? Learning to hit, kick, and avoid being hit and kicked is vital in MMA. This is why most successful MMA fighters have at least some level of expertise in boxing, kickboxing, and karate.

BJJ brown belt Stephen “Wonderboy” Thompson also has a black belt in American kickboxing that helped him become one of the most successful strikers in MMA. Conor McGregor, who also has a brown belt in BJJ, is a professional boxer, even if his only official boxing match was a lost one against Floyd Mayweather Jr. And current UFC Featherweight champion Max Holloway, with a purple belt in BJJ, routinely uses kickboxing and Muay-Thai techniques in his fights.

If You Don’t Have These Mental Traits, Don’t Try To Become a Professional Athlete

Mens sana in corpore sano, the ancient saying goes. It means "a healthy mind in a healthy body", and time has proven its validity. It is, in turn, valid the other way around as well: to have a healthy body, you need a...

Buyer’s Guide to Tactical Gear We all love adventure. If you are the type that gets thrilled by outdoor activities like wildlife observation, or better still, you shoulder some security responsibility, you might have...

It is no secret that your brain and body have a very symbiotic relationship. Your mental health affects your physical health and vice versa. However, when we are talking about weight loss, we seldom talk about the eff...